Located next door to the World Famous Chinese Theatre, Madame Tussauds is Hollywood's newest must-see attraction where you can see, touch and take photos with all of your favorite celebrities! We've taken down the museum-style ropes and poles so that YOU can get up-close and personal with Hollywood's biggest A-listers. Sit down for breakfast with Audrey Hepburn, be the President and take your seat in the Oval Office, ride a bike with everyone's favorite Extraterrestrial friend E.T., and shoot hoops with Kobe Bryant. With over 125 figures, there is something for everyone! KIDS GO FREE - Madame Tussauds Hollywood w/ Adult admission.
http://usfamilycoupons.com/coupon.php?regionid=75&bid=11238&dealid=1308 @usfg

We had a really great time at Madame Tussauds Hollywood Saturday ! Their were so many wax stars to see , I could hardly wait until I saw the next one ! They looked so real , it was almost like they were really alive ! The first room was called the A list party - music was playing while we saw celebrities like Justin Timberlake ,Charlize Theron and Lady Gaga .
Next we went to the Spirit of Hollywood -where we saw Charlie Chaplin a video of  Charlie was playing in the background . My niece put on his famous hat and we took a picture of her . I really enjoyed the wax figure of Elizabeth Taylor dressed as Cleopatra she looked really beautiful. And Vivien Lee and Clark Gable dressed in Gone with the wind attire.
The next room was Westerns - Robert Redford and Paul Newman dressed up as Butch Cassidy and the Sundance kid. Paul Newman's eyes were a beautiful blue . And one of my dad's favorite was John Wayne .The next room was crime- My brother in law loved seeing Marlon Brando sitting at a desk dressed as " The Godfather " . He sat down next to him and took a picture with him.
Next was the room called Modern Classics- John Travolta dressed in his outfit from Grease. We also saw Tom Hanks as Forest Gump. Their was a lot of actors to see ! All together their are 11 different rooms. I loved seeing Selena she looked so beautiful in her purple outfit. And behind the scenes where a video plays to show you the different steps it takes to make a wax figure. My niece even made a wax mold of her hand . 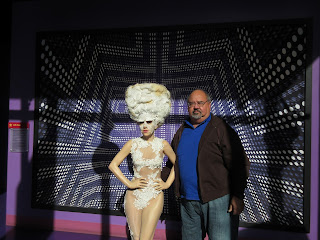 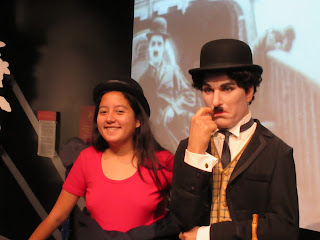 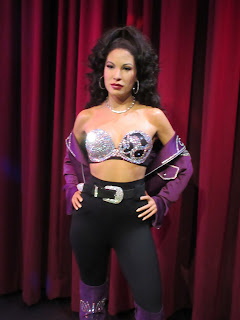