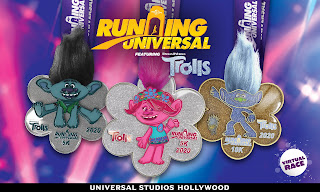 Runners of All Ages and Skill Levels Can Choose from a Variety of Virtual Race Packages and Receive a Collectible Finisher Medal Featuring Trolls World Tour Characters Poppy, Branch or Guy Diamond

Sign Up Here for the Event; Registration is Limited
Universal City, CA, June 15, 2020 – Universal Studios Hollywood invites guests to bring the excitement and colorful exuberance of DreamWorks Animation’s Trolls to their front door by participating in the all-new 5K, 10K or Kids’ 1K “Running Universal” Virtual Race.
Registration is now open at www.RunningUniversal.com with multiple standard and VIP packages available. Registration is limited and the Virtual Race can be completed at any time.
All participants will receive a collectible finisher medal featuring their favorite Trolls World Tour characters, complete with touchable hair. Runners who complete the virtual 5K can choose between colorful Poppy or Branch medals, while those who complete the virtual 10K will receive a sparkly medal featuring the energetic Guy Diamond. Guests can also choose to purchase the Trolls Party Package which includes all three medals. Kids who run the 1K will receive their own exclusive Trolls medallion.
Guests can choose between several different running packages to commemorate their own hair-raising Trolls tribute to the popular “Running Universal” series. The Standard 5K or 10K package will include one collectible medal, a themed drawstring backpack, a collectible Trolls pin and a downloadable bib and certificate. The VIP 5K or 10K package will include the Standard package items plus a Running Universal reusable water bottle. Young racers participating in the Kids’ 1K will receive an exclusive medallion, a themed drawstring backpack and a collectible Trolls pin along with a downloadable bib and certificate. The ultimate Trolls fan can select the Trolls Party Package, which includes all three medals along with the Standard Package items and reusable water bottle.