The Darkest Hour- now playing in select Theatre's . We had a wonderful time at the panel discussion for " The Darkest Hour " yesterday ! Gary Oldman, Ben Mendelsohn and Randolph Churchill were at the Queen Mary . The movie is wonderful ! And the performances make you feel like you are living in London at the time of Hitler's reign and Churchill's battle to stop him ! The scenery and costumes really fit the movie well . A must see movie you will never forget ! 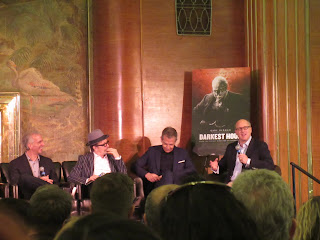 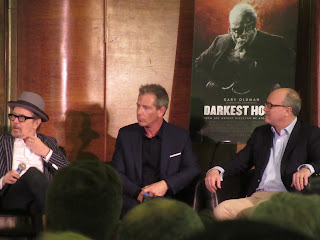 Watch Trailer #2 here
YOU CANNOT REASON WITH A TIGER:
https://youtu.be/TJ5sjFf4w1k

Story: During the early days of World War II, with the fall of France imminent, Britain faces its darkest hour as the threat of invasion looms.  As the seemingly unstoppable Nazi forces advance, and with the Allied army cornered on the beaches of Dunkirk, the fate of Western Europe hangs on the leadership of the newly-appointed British Prime Minister Winston Churchill (Academy Award nominee Gary Oldman).  While maneuvering his political rivals, he must confront the ultimate choice: negotiate with Hitler and save the British people at a terrible cost or rally the nation and fight on against incredible odds.  Directed by Joe Wright, DARKEST HOUR is the dramatic and inspiring story of four weeks in 1940 during which Churchill’s courage to lead changed the course of world history.
Director: Joe Wright (“Atonement,” “Hanna,” “Pride & Prejudice,” “Anna Karenina”)
Writer: Anthony McCarten (“The Theory of Everything”)
Cast: Gary Oldman, Kristin Scott Thomas, Lily James, Stephen Dillane, Ronald Pickup, and Ben Mendelsohn

WHERE:                  The Queen Mary (1126 Queen Mary Hwy, Long Beach, CA 90802)
The Queen Mary is opening their latest exhibit, Their Finest Hours, on December 7th. The exhibit will showcase several Churchill artifacts and letters along with set pieces from DARKEST HOUR, including the replicas of the War Rooms where Winston Churchill and the Allies plotted Hitler’s defeat. Learn why the Queen Mary was Churchill’s secret weapon and see where history was made.